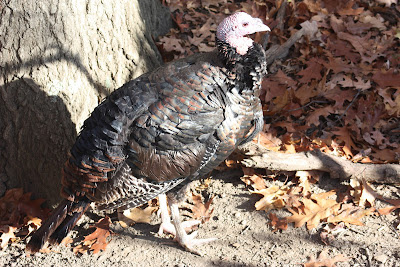 The photograph at left was taken by David Hone at the Pittsburgh Zoo.  They are actually quite common as wild individuals in that surrounding area, so it's a bit amusing that the shot ended up coming from the zoo. In any case, I give you this turkey to highlight two brief myths.

This shows up in the literature consistently, especially in paleontological studies seeking to create nice categories among living flyers to compare their plots of fossil attributes to.  Now, I agree that domestic chickens are pretty poor at flying by most estimates, but their derived from a group that is, on the whole, not so much "bad" at flying as quite specialized.  Galliform birds are, on the whole, adapted for burst launching - that is, they spend most of their time on the ground, and when startled, can take off with very high accelerations at a steep angle.  This requires large muscles (including a large pectoralis minor; Galliformes includes species with some of the largest relative pec. minor fractions among birds) and stiff forelimb elements.  In short, because takeoff is energetically and mechanically rigorous, being particularly good at takeoff means being "overbuilt" compared to more typical flyers.  So even though galliform birds, such as turkeys, cannot stay in the air very long (their fast twitch flight muscles get tired quickly) they have more extreme flight adaptations than many other birds.  Note that these avian fast twitch muscles generate huge amounts of power: about 390 W/kg (compared with roughly 175 W/kg or less for aerobic muscle in birds).

Myth 2: Big birds have to run to take off.

This one comes up pretty often in general texts (see Vogel, 2003) and paleontological discussions of flight performance in fossil taxa.  The turkeys apparently didn't get the memo, though, as they are among the heaviest living flying birds and (as discussed above) are not only able to launch without a run, but are actually burst launchers, so they are taking off at a steeper angle than many smaller birds.

As it turns out (and I'll write more on this some other time) running launch in birds has very little association with size, assuming you correct for habitat differences.  You see, water birds are, on average, a bit bigger than land birds, and water birds often run to take off - but that's because of the dynamics of water launching, not size.