Not all rays are aquaflyers in the sense I am using here.  Many rays propel themselves by moving a series of waves down either pectoral complex like this.  I'd like to talk more about that in the future, but for now, I am talking about those rays that propel themselves by flapping underwater flight - that is, reciprocating the entire pectoral complex on either side of the body as wings, like this. 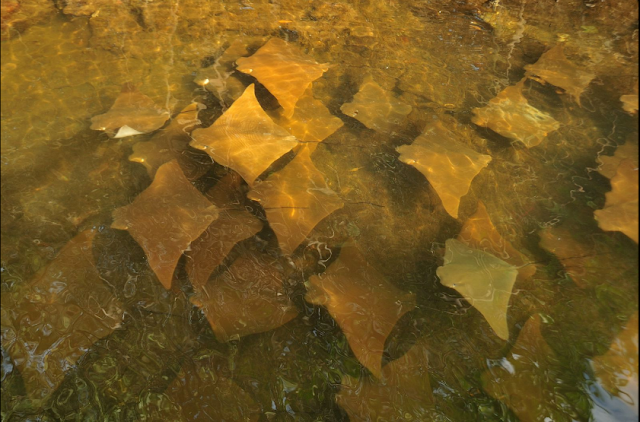 Aquaflying rays, such as cownose rays, often move in large groups (see photograph above by Chris Hobaugh.  She retains all copyright; do not use without permission).  There are some quite interesting potential dynamics there in terms of motion in neighbor wakes and combined tip vortex effects, but so far as I am aware there are no data on those aspects for rays, so there isn't much that can be said on it for now (though there might be something on it down the road, hint hint).

One thing that is known, however, is that aquaflying rays move with almost absurdly large advance ratios.  Ridiculous, even.  To understand what this means, we need to examine the idea of advance ratios.

For an airplane with a propeller, advance ratio is simple: it is the ratio of the forward speed over the product of the revolution rate of the propeller and the diameter of the circle made by the propeller blades.  So, we have:

Where v is forward speed, f is the rate of propeller spin, and d is the diameter of the swept disc.

For a flapping animal, we have to take into account the reciprocating wings/fins, and this can be done using amplitude as an added variable (see Ellington, 1984; Vogel, 2003).  So, this gives us:

Where v is forward speed, r is the amplitude of the stroke (in radians), f is the flapping frequency, and l is the wing length.  To get a number you can compare to an airplane or other machine using a propeller, multiple by π.

Now, flapping swimmers often do quite well.  Penguins, for example, manage advance ratios around 0.5, which is quite good for motion in water (Hui, 1988).  However, cownose rays exceed an advance ratio of 2 (Heine, 1992).  This is an extraordinary amount of forward motion for each wing cycle.  The trick is that they use their entire bodies as aquafoils, and therefore get lift (mostly as thrust) not just from motion of the "wings", but also from motion of their bodies.

Now, one thing that's interesting about this in rays is that, theoretically, they should be able to get a highly mirrored stroke.  I mentioned the issue of mirrored strokes in the penguin post, and if you want a more technical discussion check out Habib (2010).  The upshot is that if both the upstroke and downstroke produce similar amounts of thrust, then the animal will proceed at a relatively constant speed, rather than lunging forward on each downstroke.  That "lunging" is called a surge acceleration.  The orthogonal motion (up and down for an aquaflyer) is called a heave acceleration. 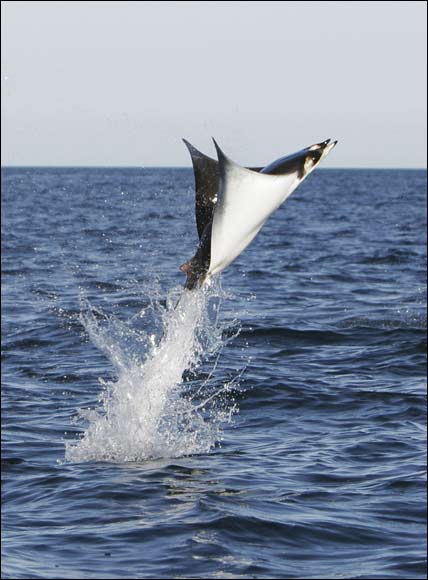 Aquaflying animals can waste a lot of energy in surge accelerations if they don't have equal phases to their swimming strokes (example: puffins).  Rays probably have very small surge accelerations, because their stroke cycle is close to a true sine wave and their bodies (which are the aquafoil) are relatively symmetrical in the dorsal and ventral aspects. However, to my knowledge this has not been examined in detail despite the fact that accelerometer data do exist for rays.  If this prediction is accurate, however, rays are getting the best of two worlds of aquatic efficiency: high advance ratios from using the entire body for thrust, and low surge accelerations through stroke mirroring.  Presumably this comes at the cost of some additional heave acceleration, but it's still an awfully good bargin, and some of the rays can get a good head of speed going, too.  So much so, that they can do things like leap multiple body lengths out of the water.  See photo at left (taken from here).  More photos of leaping mobula rays by Barcroft here.

Ellington CP. 1984. The aerodynamics of hovering insect flight. Philosophical Transacations of the Royal Society of London, Series B. 305: 1-181

Habib M. 2010. The structural mechanics and evolution of aquaflying birds. Biological Journal of the Linnean Society. 99(4): 687-698