There are multiple methods for modeling the production of lift, but most engineers now favor the use of a vortex model.  A vortex model works on the observation that a lift-producing foil has two mathematical components to the flow about the foil: a translational component and a circulation component (See image at left).  The circulation is a component only; no fluid actually travels around the wing in a full loop, but there is a component of the overall flow that can be represented as a “bound vortex”: fluid rotating on the wing itself. 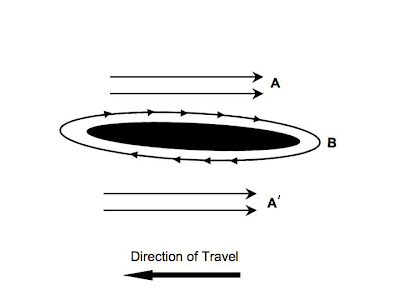 The image at left is a quick schematic I put together that shows flow components of a wing. The translational flow is indicated by A and A’ (above and below the wing, respectively).  The label B indicates the circulation component.  When the wing is at a positive angle of attack, circulation is present on the wing.  The sum of B and A is then greater than the sum of B and A’ (note that the direction of B and A’ are opposite), such that flow above the wing is faster than that below it.

This results in shed vortices: rotational elements of fluid pushed along behind the wings that balance the angular momentum of the vortices on the wings.  It is the circulation that producing asymmetrical flow: the circulation adds to the velocity of the air above the wing while it simultaneously reduces the net velocity of the flow below the wing (Alexander, 2002; Vogel 2003; Pennycuick, 2008).  This produces a differential pressure that pushes upwards on the wing.  The same process can be viewed in terms of momentum: the circulation about the wing means that air coming off of the wing is deflected (generally downwards and backwards, for a horizontally flying animal), and this added momentum means that force is being exerted on the air, which pushes back on the foil (in accordance with classic mechanics, specifically the Third Law of Motion).  The rate of momentum transfer is equal to the total fluid force (Vogel, 2003).

The lift produced by a wing can therefore be examined in terms of vorticity: the strength of the circulation on the wing and the shape and strength of the vortices that swirl behind a flying animal (or machine).  These shed vortices are collectively called a “vortex wake”.  One method of distinguishing modes of flapping flight is through the differences in the trailing vortices, which indicate differences in how momentum is added to the incoming flow.
Posted by Michael Habib