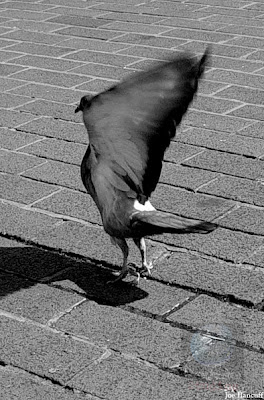 One really cool mechanism used by some flying animals to quick-start lift on the wings is called a "clap and fling": the wings are clapped together above the animal on the upstroke, and then peeled apart.  This forces the vorticity to start on the wings almost immediately, and produces a counter vortex above the animal that results in a handy low-pressure zone above their body.  Insects used this mechanism the most, but some birds do, too.  The photo at left shows a pigeon using a clap and flight during launch.  This is why pigeon takeoff often produces a clapping sound.

(In the photo, if you look closely, you'll see that the pigeon is just finishing toe-off.  As usual, the legs produce most of the launch power, then the wings will engage immediately - thanks to the clap and fling, the wings will hit max lift almost immediately, and that allows a very steep climb-out for the pigeon after it leaves the ground).

The photograph was taken by Joe Hancuff.  You can check out his work here and here.  He's also on twitter (@joehancuff).  He has a particularly extensive gallery of dancers.
Posted by Michael Habib