Vadas Gintautas and I have done some more data collection on the spider aero-control work at this point, and the results are proving to be pretty darn exciting.

To bring everyone up to speed, here's the gist. We are working on the issue of aerial righting in spiders.  The way in which spiders right themselves after a fall from a ledge, branch, etc. has never been reported in the literature.  It is an interesting problem, because:

1) Spiders can't twist around in the air like cats and other mammals can.

2) Spiders that pursue prey over uneven terrain, rather than using burrows or webs for capturing food, are bound to fall sometimes.

3) Most spiders are small enough that they are going to fall in an intermediate Reynolds number regime - i.e. the air will be pretty sticky for them, but they won't just be "sinking" like a tiny gnat would.

4) Spider body plans are already of interest in robotics designs for movement over land.  Now imagine that the spider-bot can turn itself in the air using wake capture so that it always lands on its feet.  Yup, it's awesome. 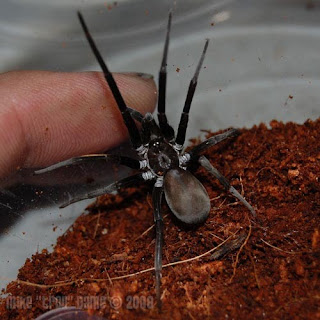 What's particularly interesting here, though, is that we are not using the spiders we would expect to be particularly good at aero control.  We are using Black Hole Spiders, Kukulcania hibernalis, which hunt and move mostly over the ground.  They can climb, though, so we figure they might still have some kind of aerial righting response.  If they do, then it would suggest that aero control appears in even those species with limited arboreal habits.  A photo of K. hibernalis is shown at left.  It comes from the site of Ken the Bug Guy here, which is where we purchased our spiders.

What's cool is that we have found that our little spider stuntmen can, indeed, right themselves in the air, and they do it using a nice, simple trick: when dropped, the spiders immediately assume a leg position that makes them passively unstable in roll while inverted, but stable in roll when upright - this means that the spiders automatically flip right-side-up if they happened to be falling upside down, and then they stay that way for the rest of the trip.  All the spiders have to do is hit the critical position and hold it.  We are working on the algebraic solutions that demonstrate why the righting position works, but our simulation study already predicts their motion quite well (i.e. it matches our imaging studies of the real spiders).

The aerial righting response we have captured is somewhat similar to that seen in other arthropods, such as ants and stick insects.  Since we have found it in a mostly terrestrial animal, it is looking ever more likely that this is a method of aerial righting that is extremely widespread in terrestrial arthropods, and that's very neat stuff for understanding arthropod evolution (which is handy because arthropods represent most of the animal species on Earth).

We are not the only group working on falling spiders.  As I mentioned recently in an earlier post, Robert Dudley of Berkeley has a student working on arboreal spiders from the neotropics that, not surprisingly, are even better at aero control (I won't get into details because they have a paper pending, but it's awesome).

Vadas and I are setting up to work on some additional species of spiders, in order to take a more comparative approach.  We will include some arboreal spiders that we expect will be able to actually glide.  Not kidding; gliding spiders.  There are all sorts of other aerial behaviors we can find in spiders, as well, that take into account the use of silk for producing drag lines and parachuting.  There is an entire realm of aerial acrobatics in spiders that has been rather understudied (ballooning being the only one of the bunch to get much play in the literature).  So stay tuned for spinning, dropping, gliding, righting, leaping, parachuting spiders.