Back again for more water launching goodness.  These results were presented at SVP 2011; with luck they will be finalized and appear in a formal journal (PLoS ONE) this summer.

Here's what I get for Anhanguera, using the technique from yesterday's post:

The initial escape phase could be accomplished with a net remaining acceleration of 17.6 m/s2, and an acceleration of up to 39.2 m/s2 on the subsequent, unhindered propulsive bound. Sufficient contact area to provide a useable propulsion phase would require that the wing finger be opened 15-25 degrees.  This contact area was greatly augmented by the exceptionally broad MCIV-PHIV joint.  The escape phase would require exceptional shoulder adduction musculature, and I note that Anhanguera appears to have had such expanded musculature: the orientation and enlargement of m. subscapularis appears to be of particular importance, along with the reinforcement of the joint between the scapula and notarium (Bennett, 2009). My model predicts that Anhanguera would have used a series of repeated propulsions when launching from water (unlike terrestrial launch), which would have occurred as a series of “hops” across the water surface.

This repeated propulsion is required because the animal loses energy to the initial escape from surface tension, and because no lock and release is available on the wing finger joint during water launch, which somewhat reduces power output.  The quadrupedal water launch still greatly outperforms any kind of bipedal launch, however.  In fact, bipedal launch from the water was almost certainly impossible for pterosaurs of practically any size (bipedal terrestrial launch was likely impossible, as well for most species - not to mention inferior in performance in just about every way).  This is particularly true given the recent work on floating position done by Dave Hone and Don Henderson. 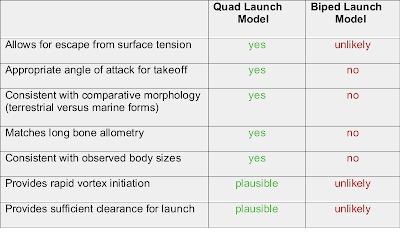 One important note is that this water launch model makes predictions about morphological features one should expect to find in pterosaurs adapted to water launching.  In this way, it makes testable predictions from the theoretical model.  This is important, as we will presumably never get water launch trackways.

Based on this water launch model, we can expect that the following features should be better represented in marine taxa than terrestrial taxa:

So far, this pattern appears to hold.  While azhdarchids do have expanded dp crests, and somewhat expanded triceps they lack most of the other features in the list (at least comparatively speaking).  So far, only marine pterosaurs exemplify all of the above simultaneously.